The Unfortunates by Sophie McManus 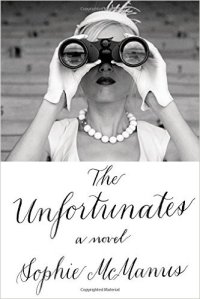 This extraordinary debut novel by Sophie McManus is a contemporary American tragedy of breathtaking scope: a dramatic story of pharmaceutical trials and Wall Street corruption; of pride and prejudice; of paranoia and office politics; of inheritance, influence, class, and power.

Cecilia Somner’s fate hangs in the balance. A larger-than-life heiress to a robber baron’s fortune, once known as much for her cruel wit as for her tremendous generosity, CeCe is now in opulent decline. Afflicted with a rare disease and touched by mortality for the first time, she finds her gilded, by – gone values colliding with an unforgiving present. Along with her troubled son, George, and his out – sider wife, Iris, CeCe must face the Somners’ dark legacy and the corrupting nature of wealth. As the Somner family struggles to find a solution to its troubles, the secrets and lies between CeCe, George, and Iris grow entangled. CeCe’s world topples, culminating in a startling turn of events that is as unforgettable as it is life-changing.

The Unfortunates, hilarious and heartbreaking by turns, is most of all a meditation on love: as delusional obsession, as transformation, and, ultimately, as a coming to grace.